Most agencies and companies have moved to multi-panel drug testing solutions that test for 5-12 drugs simultaneously because results and studies have shown the multi-drug testing is more effective and less costly in the long run. If you are
still testing with single drug dip cards, particularly under a single “drug of choice” concept, you may want to review the facts on using this protocol which is being challenged by agencies, reports, and studies supporting the need to test for multiple drugs.

The National Institute on Drug Abuse (NIDA) currently states that “Abuse of tobacco, alcohol, and illicit drugs is costly to our Nation, exacting more than $700 billion annually in costs related to crime, lost work productivity and health care.”  This means looking at the bigger picture and long-term costs of drug abuse instead of the more limited aspect of individual test costs per offender.

if a single (non-prescription/specialty) drug dip test costs only 38 to 75 cents for a test under “drug of choice” testing, if the offender knows that is the testing process being used and switches to another drug of choice, you are now wasting money with meaningless results.

Reasons To Accurately Address Drug Abuse
In Crime And Corrections

In Criminal Justice, The Main Goals Are To:

• Promote Public Safety but Prepare Offenders for Successful Reentry into the Community as employable, recovered addicts

Study data shows that both renewed criminal activity and recidivism are often a result of renewed drug abuse aimed at numbing the difficulty and shame resulting from a lack of viable financial stability or employment, often resulting in homelessness.
(2014 Report of the Massachusetts Department of Corrections Two-Year Recidivism Study)

Many new crimes are thefts of drugs from pharmacies and home invasions. Yet, many states are not testing for prescription drug usage or verifying whether usage has been under a legitimate prescription because their test provider does not offer these instant tests. They need to incorporate these tests into their programs rather than relying on outdated panels to effectively halt these types of thefts that support drug abuse.

If an offender is aware that the State is only testing for a single drug and at certain times, they will often change what they are using and/or plan a usage pattern based on the duration the drug remains in their system to the date/time of the testing. Learn how randomized testing with multiple drug configurations can elevate testing programs. 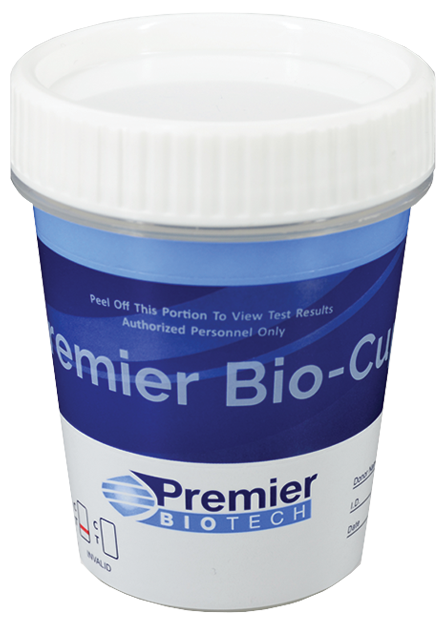 Multi-Panel Testing With The Premier Bio-Cup