Where are we one year later?

As we head into a new year, it is essential to reflect on the past and see how we as a company or a nation can improve next year. 2020 was the year we all wished would go away, and hoped 2021 would be a fresh start in a post-pandemic world. While, unfortunately, we still have to work through this pandemic, there was a bright side for many businesses this year. Revenue and profits were up and exceeding previous years, allowing for companies to bring back and hire on new workers. However, with a mass hiring frenzy does bring with it some worry and important choices to make.

Even though this current pandemic took over most minds, it wasn’t the only monster devouring our nation. The opioid epidemic has been raging across this country for many years, with overdoses increasing year after year. While everyone was sent home last year to quarantine people’s addictions did not take a day off. Unfortunately, SAMHSA(i) and other agencies could not collect enough data on current illicit and marijuana drug users due to the continued Covid-19 pandemic.SAMHSA was able to report that 10.9 million Americans admitted to using illicit drugs within the last year, and 49.9 million Americans admitted to marijuana use (i). With 19% of the US population reporting to using some type of drug we can safely assume there are more Americans using that are not accounted for.

Unfortunately, the confident reporting we are receiving is on the deaths due to overdoses from this past year. 2021 marked the first year over 100,000 US citizens died from a drug overdose (ii). A significant contributor to this epidemic is the use of Fentanyl. Fentanyl, like many opioids, does serve a purpose in medicine. Still, due to its high potency, it has become widely used on the street. Fentanyl accounted for 75% of overdoses this year (ii). However, overdoses are often a result of multiple drug use. As the DEA has warned, Fentanyl is notorious for being laced into an abundance of other drugs. This results in many not knowing that Fentanyl is in what they are using or not knowing how much. Since Fentanyl is 50 times more potent than methamphetamine and other opioids, it is easy to take too much unknowingly (iii). You can see in this map from the CDC that each state had an average of 27% increase in overdose deaths. 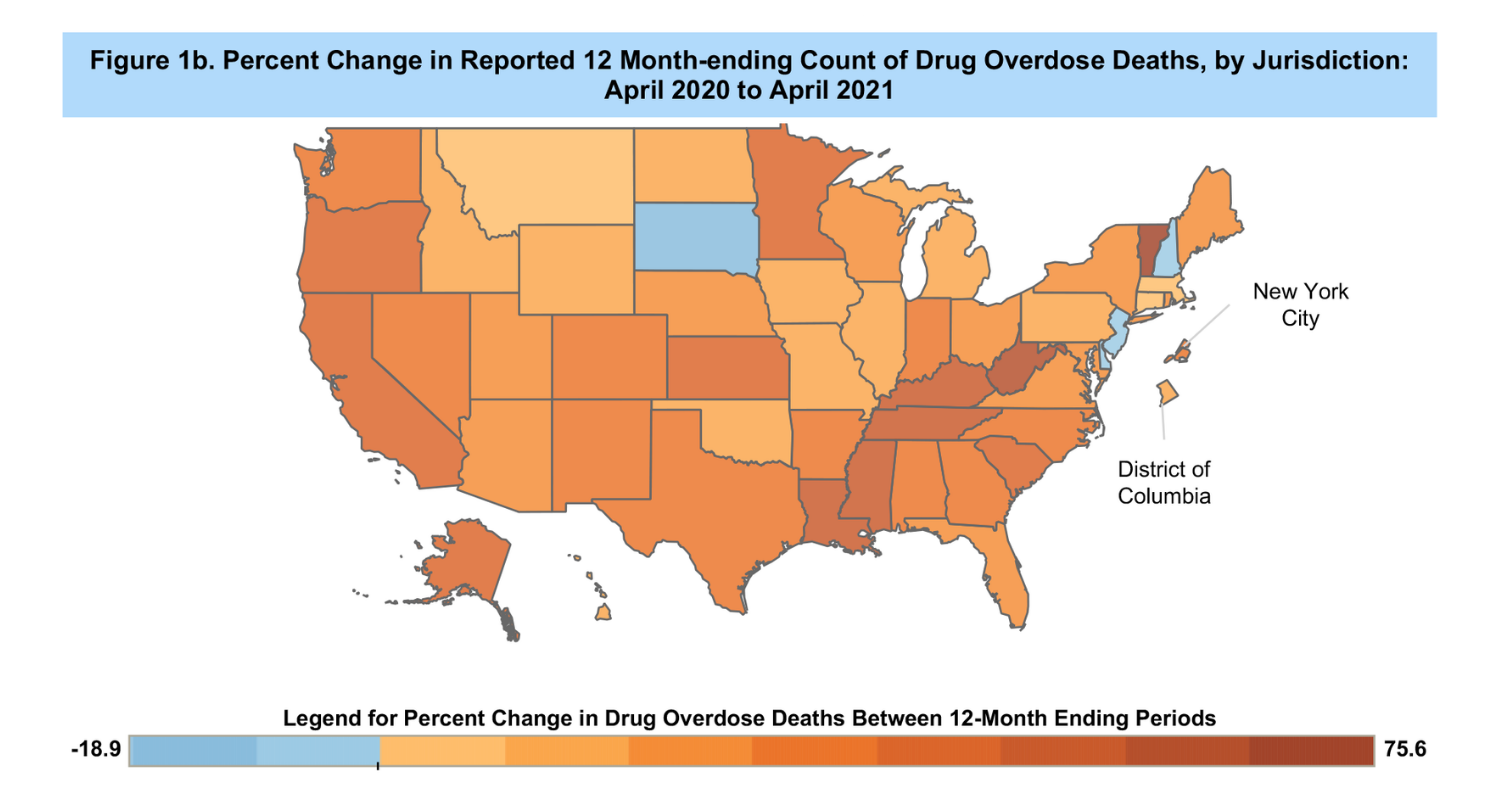 While it is too early to see if the Covid-19 pandemic had a role in the rise of drug use and overdoses, it is important to note that the opioid epidemic was a problem before this current pandemic. Illicit drug users have been on the rise since the turn of the century and only increased steadily over this last decade. Prior to the current pandemic, it was common for organizations to drug test new employees to help avoid potential problems down the road. When the country shut down in March of 2020, drug testing for many took a back seat to rush hiring. As the nation has opened up and companies began hiring more than ever, drug testing has started to resume, yet with different strategies.

We know employee drug use can lead to lack of productivity, absenteeism, and theft. 75% of US businesses experience time theft by their employees and lose over $100 million a day due to employee-related crimes (iv). In the long run, businesses have the potential to lose an exponential amount of time and money when it could be avoided with pre-employment testing. So why are employers not testing? Companies have been so focused on Covid-19 restriction that they assumed pre-employment drug testing would be too costly or invasive. With rapid oral fluid testing, your company can conduct a pre-employment test on-site with results in just minutes.

The OralTox collection process is easy to administer while providing highly accurate results. Oral fluid drug testing offers a minimally-invasive, observed collection to detect recent drug use. Using oral fluid, the collector can oversee a donor from a safe distance as they provide the oral fluid sample. This reduces the likelihood of tampering or cheating as well as a donor challenge later in the drug testing process. The observed collection also removes administrative tasks including staffing allocation to ensure same-gender collectors, testing anywhere removes the need for controlled/private restrooms or collection areas, etc.

The Future of Drug Testing: Oral Fluid Testing and the Importance of a Rapid Result

By Bill Current - President and Founder of the Current Consulting GroupThe legalization of...
Read More

As more states pass legalization laws for marijuana, retailers are beginning to question what this could mean for their organization…

A Crisis Within A Crisis

While staying at home and physical distancing is helping to slow the spread of the virus, substance abuse looks to be increasing…

PCR And Serology Based Testing Explained

PCR and Serology testing for COVID-19 have different advantages and limitations. In this article we identify the differences in these methods…

With the ongoing spread of COVID-19 (Coronavirus), we would like to reiterate our commitment to providing safe and reliable drug testing solutions and support.

Last busy season, an estimated 60% of candidates that were told to report to a collection site never executed the test. Find out why…

A common problem people who deal with drug testing are full of stories about people trying to cheat their drug test. Clinics and…

What Is Buprenorphine Although buprenorphine was intended as a treatment to help people get off of heroin, it has quickly become a popular…

PCR And Serology Based Testing Explained

PCR and Serology testing for COVID-19 have different advantages and limitations. In this article we identify the differences in these methods…

Grabbing To “Get Well”

The nationwide drug crisis, led by the increased abuse and addiction to illicit drugs and opioids is one factor driving in increase in workplace theft…

OralTox – For In Vitro Diagnostic Use

Tracking Fentanyl Across The Nation

The prevalence of fentanyl and fentanyl analogs throughout the Nation continues to spread at an alarming rate.

More and more organizations are moving to on-site oral fluid testing for their pre-employment, post-accident, reasonable suspicion and…

Testing Is Not Always Apples To Apples

What Is EtG? Ethyl Glucuronide (EtG) is a direct biological marker that is formed in the body after the consumption of ethanol from drinking…